The Scott Case and Proof of Prong 1

Prong 1 of the Althen case requires the plaintiff to prove by preponderance of evidence that the vaccine can cause the type of injury at issue in the case. One question is how much evidence is necessary to meet the preponderance standard for this prong of the Althen test? Would a scientific theory that proposes a connection between the vaccine and alleged injury suffice, or do we need controlled trials using animal or human models, or is there a balancing test involving various elements?

In Scott v. Secretary of the Department of Health and Human Services, the petitioner alleged that a measles, mumps, and rubella [“MMR”] vaccination she received caused an immune reaction that was variously diagnosed as multiple sclerosis, antiphospholipid antibody syndrome, systemic lupus erythematosus, vasculitis, encephalomyelitis and acute disseminated encephalomyelitis.  The petitioner offered the expert testimony of a treating physician on a theory called “molecular mimicry” to explain how the MMR vaccination triggered an autoimmune response in the petitioner.  According to the theory, “individual lymphocytes (B or T cells) commonly recognize and cross-react with several different antigens. In most people, the vaccine causes those B or T cells that recognize the antigen in the vaccine to produce antibodies to that antigen. However, if the virus in the vaccination shares an antigen with something else in the body (a self-antigen), an immunization that activates these B or T cells to fight the virus also activates these lymphocytes to attack the self-antigen.” (Decision at 24.) The treating physician concluded that “because antiphospholipid and anticardiolipin antibodies are often found in individuals who have viral, bacterial, or other infections, an autoimmune reaction is a suspected cause of their production.” (Decision at 25.)

But what was the petitioner’s support for this theory?

The petitioner, as support of the scientific theory, provided an article that briefly discussed the theory of molecular mimicry with regard to antiphospholipid antibody syndrome (APS). The article summarized two animal studies providing support for the theory. “The first involved mice immunized with tetanus toxoid, hemophilus influenza, and Neisseria gonorrhea. After immunization, the mice developed clinical symptoms consistent with APS. … The second study involved mice who received a synthetic peptide similar to cytomegalovirus. The mice developed antiphospholipid antibodies, but not APS.” (Decision at 25.)

The special master, relying on the medical testimony and medical literature including the article that discussed the theory of molecular mimicry, held that there was a sufficient basis to establish the first prong of the Althen test.  It would appear that the amount of evidence required to prove Althen Prong 1 is not massive and the standard is not burdensome. Based on the Scott case, as long as the alleged biological mechanism is plausible and there is some reliable and scientific way to prove the mechanism of action of the proposed scientific theory, the burden of Althen Prong 1 could be met. The question that remains is whether the burden requires a controlled study to prove the mechanism of action? Instead, would a scientifically reliable observation in a clinical setting meet the standard of proof required to prove Althen prong 1? 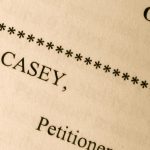